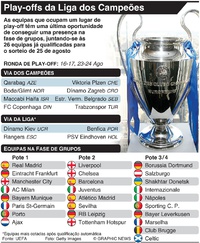 In 2024, the format is set to expand to include a 36-team single league, with the existing structure of eight groups of four scrapped. Each team will play eight league stage ties -- four home and four away -- against different opposition. A total of 189 matches will be played across the season, with an increase of 64 from the current 125-game season.