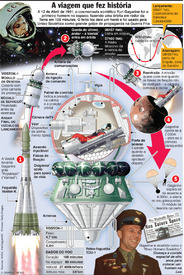 On the morning of April 12, 1961, a Soviet Air Force lieutenant -- Yuri Alekseyevich Gagarin -- was helped into an orange space suit and driven to Site No. 1 at the Tyuratam Missile Test Range, now Baikonur Cosmodrome, on the desolate steppes of Kazakhstan.

He was strapped into the small, round Vostok capsule at the top of a 280-tonne modified R-7 ICBM (intercontinental ballistic missile) designed to deliver a nuclear bomb and, at 9.06.59am, rose from the launch pad, with a cry of: “Poyekhali!” (“Let’s go!”)

Sixty years on, celebrations of “Yuri’s Night” -- as April 12 has become known around the world -- will be subject to restrictions amid the coronavirus pandemic. Roscosmos, the Russian Space Agency, had planned a United Nations discussion with the Americans on the future of joint space programmes.

Gagarin himself did not live to see the Moon landings. He died in March 1968, at the age of 34, in a training flight crash, an international celebrity and Hero of the Soviet Union. His ashes are buried in the wall of the Kremlin, the site commemorated with a plaque.