August 3, 2020 - November 23, 2020 - The WTA Tour restarts for the first time since March at the Palermo Ladies Open in Sicily, the first of 20 tournaments to complete the season that include two Grand Slams and two Premier Mandatory events in Madrid and Beijing.

The Australian Open in January, won by rising U.S. star Sofia Kenin, is the only Grand Slam to have taken place in 2020. Following the cancellation of the entire grass court season, including Wimbledon, the aim is now to complete two further Grand Slam showpieces at the U.S. Open in New York, and the rescheduled Roland Garros on the Paris clay.

Only the top eight players who collect the most ranking points over the calendar year will compete in the season-ending Shiseido WTA Finals, to be played in Shenzhen, China.

Points that contribute to the Race to Shenzhen ranking are accumulated in the Grand Slams, and WTA Tour (Premier Mandatory, Premier 5, Premier, and International series events). 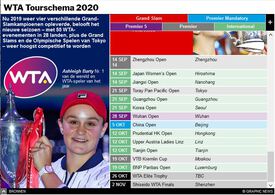 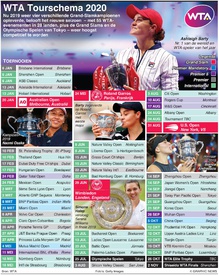