March 1, 2020 - Mass participation in the 2020 Tokyo Marathon has fallen victim to the coronavirus outbreak, with the race restricted to elite runners only. The race was cancelled for over 38,000 amateur runners afters organisers took the decision to implement preventative safety measures. 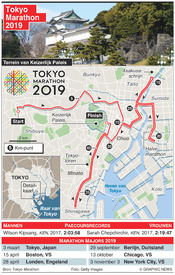 Defending champion Birhanu Legese heads the men’s field in Tokyo. Legese, who narrowly missed out on the Berlin title in September despite recording an outstanding personal best of 2:02:48, will face tough competition from long-term rivals including fellow Ethiopian Getaneh Molla and Dickson Chumba of Kenya, a two-time Tokyo champion.

Expectations are high for a record-breaking pace in the women’s race. Ethiopian rising star Ruti Aga (2:18.34), heads the field, aiming to defend her title, with Birhane Dibaba (2:18.46) providing fast opposition.

The course was revised in 2017 to move the race finish in front of the Imperial Palace, and both the men’s and women’s races produced new records that year.