February 10, 2020 - “Parasite” is the first non-English language film to win the best picture in the 92-year history of the Academy Awards. Bong Joon Ho’s class satire took Hollywood’s top prize at the Oscars on Sunday night, along with awards for best director, best international film and best screenplay.

Joaquin Phoenix won the best actor for his role as a supervillain in “Joker” -- Phoenix’s first Oscar and fourth nomination. Renée Zellweger won the best actress award for her tumultuous performance as Judy Garland in the biopic “Judy.”

Four-time nominee Brad Pitt won his first Oscar as best supporting actor for his role as a stuntman in “Once Upon a Time… in Hollywood.” The supporting actress award went to Laura Dern for her role as an ambitious divorce attorney in “Marriage Story” -- the only award of the night for a Netflix production.

Woody, Buzz and Bo Peep did it again in the fourth instalment in the Pixar franchise, with “Toy Story 4” winning the Academy Award for the best animated feature film. 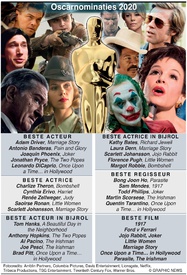