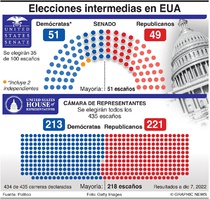 Only two African Americans - both men - have ever served on the court: Justice Thurgood Marshall from 1967 to 1991 and his successor Justice Clarence Thomas, who is set to become the oldest member on the bench at age 73.

A total of 115 justices have served on the Supreme Court in the nation's history, including 17 as chief justice.

Ketanji Brown Jackson, 51, a former law clerk to Mr Breyer, is believed to be the top contender for the job.

With conservatives now in full control of the court, replacing Justice Breyer with another liberal would not change its ideological balance or affect its rightward trajectory in cases on abortion, gun rights, religion or affirmative action.