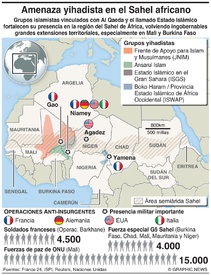 Takuba, which means “sabre” in the Tuareg language, will be comprised of Special Operations units from approximately a dozen European countries. Special forces from France, Great Britain, Estonia and the Czech Republic are already committed to Takuba, with other deployments expected from Norway, Ireland, Latvia, Denmark, Germany, Belgium, Sweden and the Netherlands.

France launched Operation Serval in 2013, after extremists linked to Al Qaeda exploited a Tuareg rebel uprising to take the cities of Timbuktu and Gao. A year later, that mission evolved into Operation Barkhane with a mandate for counter-terrorism missions across the vast Sahel region, encompassing Senegal, Mauritania, Mali, Burkina Faso and Niger.

Of more than 24,200 foreign and regional troops currently deployed in the Sahel, France remains the region’s primary security guarantor, with about 4,500 French forces operating in Operation Barkhane.

At almost 13,300 military personnel, the United Nations Multidimensional Integrated Stabilization Mission in Mali (MINUSMA) has more troops in the Sahel than all other regional and foreign forces combined. However, UN peacekeepers have become a frequent target of insurgent attacks in Mali, suffering 206 fatalities to date.

The Group of Five (G5) Sahel Force, established in 2017, consists of 5,000 soldiers from Mali, Burkina Faso, Niger, Chad and Mauritania.

The U.S. military has around 800 special operations forces in Niger, along with a new drone base at Dirkou, flying armed MQ-9 Reapers against Islamic State fighters in southern Libya.

The European Union Training Mission (EUTM) has 620 troops based at Bamako. While over 14,000 soldiers have gone through the EU programme since 2013, the capabilities of the Malian armed forces remain severely lacking -- raising questions over whether a similar boost in training efforts under France’s Operation Takuba would be any more effective.