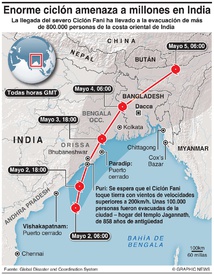 President Donald Trump canceled a visit to Poland scheduled for the weekend and Florida’s governor expanded a state of emergency to prepare for Hurricane Dorian, which is forecast to make landfall on the Atlantic coast Monday as a dangerous Category 4 storm.

Dorian is aiming at central Florida, including the famed Space Coast. It is expected to make landfall on Monday, the Labor Day holiday. It could churn across dozens of launchpads owned by NASA, the U.S. Air Force and companies such as Elon Musk’s SpaceX and Jeff Bezos’ Blue Origin.

The hurricane season typically peaks between mid-August and late October. One of the most powerful storms ever to hit the U.S. was on Labor Day 1935. The unnamed Category 5 hurricane crashed ashore along Florida's Gulf Coast on Sept. 2. It was blamed for over 400 deaths.