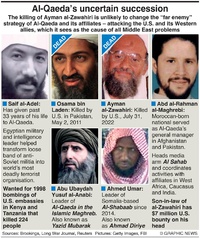 Zawahiri was killed in a counter-terrorism operation carried out by the CIA in the Afghan capital Kabul on July 31. It was the biggest blow to the militant group since its founder Osama bin Laden was killed by U.S. special forces in 2011.