June 2, 2022 - June 5, 2022 - Celebrations take place for the Platinum Jubilee of Queen Elizabeth II, the world’s longest-serving female head of state. Throughout her long reign the Queen has been proud of her links with the Commonwealth, a voluntary association of 54 independent countries, almost all of which were formerly under British rule. 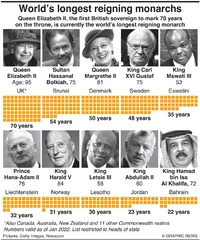 The Commonwealth spans every geographical region, religion and culture, and exists to foster international co-operation and trade links between people from all parts of the world.

As Head of the Commonwealth, the Queen has a purely symbolic role, with no political or executive power over member nations.

Aside from the United Kingdom, she remains Head of State in 14 Commonwealth Realms, including Canada, Australia and New Zealand.

The 54 members have a combined population of 2.4 billion, almost a third of the global population.