May 20, 2022 - Fertilizer prices have risen more than 36% since the start of 2022, driven by increased commodity costs, supply disruptions caused by the invasion of Ukraine, and export restrictions. 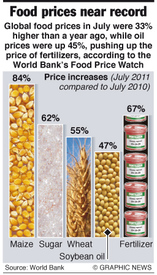 Before Moscow invaded its neighbour in February, food insecurity had begun to spike. According to the United Nations, more than half a million people live in famine conditions, increasing more than 500% since 2016.

The UN Secretary-General Antonio Guterres has said that Russia’s war “threatens to tip tens of millions of people over the edge into food insecurity.”

Russia and Ukraine alone produce 30 per cent of the global wheat supply. The U.S. Department of Agriculture predicts Ukraine’s wheat production to fall by 35% to 21.5 million tonnes due to the war. In addition, the price of wheat jumped on international markets after India banned exports on May 14. The export ban comes after a heatwave hit India’s wheat crops, taking domestic prices to a record high.

Guterres also said Russian food and fertilizers “must have full and unrestricted access to world markets.”

Russian fertilizers are not subject to Western sanctions, but the world’s largest exporter has blocked vital exports. According to the Food and Agriculture Organization, Russia accounted for 16% of global exports of nitrogenous fertilizers, 19% of potash, and 14% of phosphates in 2019.

In another risk to global food security, in July 2021, Beijing ordered Chinese fertilizer companies to stop exports. Before the restrictions, the share of the world’s second-largest fertilizer exporter was 24% for phosphates, 13% for nitrogen, and 2% for potash. China is the world’s top exporter of phosphates.