September 19, 2021 - September 26, 2021 - This year’s edition of the UCI Road World Championships will take place in the Flanders region of Belgium and marks the 100th anniversary of the event. 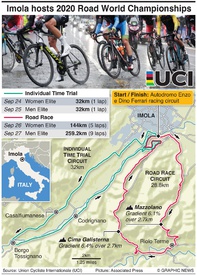 Since the first UCI Road World Championship in 1921 in Copenhagen, Belgium has hosted the event a total of nine times. Six of those have been in the northern Dutch-speaking region of Flanders.

The 2021 edition will feature 11 races, including time-trial, road race, and mixed relay events.

The schedule begins with the individual time trials between Knokke-Heist and Bruges, kicking off with the men’s elite event.

In the mixed relay team time trial, teams of three men and three women compete from the same nation. The men race from Knokke-Heist to Bruges and the women start in Bruges before making a loop back to the city, with the combined fastest time deciding the winner.

After that, it’s the turn of the road races. The men’s and women’s junior races both take place entirely on a circuit around Leuven, with the women taking on five laps and the men tackling eight.

The men’s under 23 race as well as both the elite men’s and women’s races all start in Antwerp, before heading south to the Leuven (4 climbs) and Flandrien (5 climbs) circuits.