Graphic shows tale of the tape for Joshua and Usyk, with details of previous fights.

September 25, 2021 - British boxer Anthony Joshua takes on Ukrainian Oleksandr Usyk in a mandatory title defence for the IBF, IBO and WBO heavyweight titles, as well as the WBA Super crown. 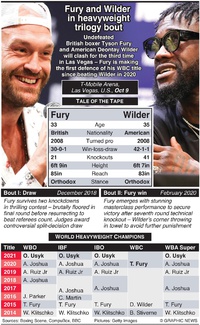 Fury-Wilder to do battle in trilogy fight

Joshua, the 2012 Olympic champion, had notched up 22 wins since turning professional in 2013, before suffering a shock first defeat of his professional career against Ruiz at Madison Square Garden, New York, in June 2019.

Since regaining his titles with a rematch against Ruiz, Joshua has now been ordered to defend his belts against mandatory challenger Usyk, after collapse of fight with fellow British boxer Tyson Fury.

Usyk is an accomplished fighter at cruiserweight, becoming the first man to hold all four divisional belts as undisputed champion, before moving upto heavyweight class.