Graphic shows timeline of the 1994 genocide.

April 7, 2021 - France is to open its archives on its role in the 1994 Rwandan genocide to the public. The timing coincides with the 27th anniversary of the start of the massacres, in which ethnic Hutu extremists killed around 800,000 people in 100 days in an attempt to exterminate Rwanda’s minority Tutsi community, which had long dominated the country. 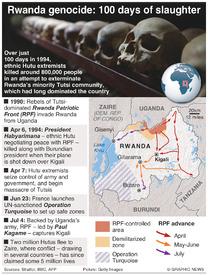 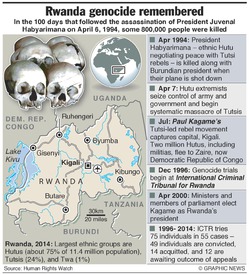 A report commissioned by President Emmanuel Macron concluded that France bears “heavy and overwhelming responsibilities” as French authorities remained blind to the preparations for genocide.

But the report, published in March, cleared them of complicity in the slaughter that left over 800,000 people dead, mainly ethnic Tutsis and the Hutus who tried to protect them.

Historian Vincent Duclert, who led the commission that studied France’s actions in Rwanda from 1990-94, said it was important to acknowledge France’s role as a “monumental failure.”

Macron’s decision to commission the report – and open the archives to the public – are part of his efforts to more fully confront the French role in the genocide and to improve relations with Rwanda, including making April 7, the day the massacre began, a day of commemoration.

Rwanda, which has long accused France of complicity, said it welcomed the report, and said it would soon release its own report, which “will complement and enrich” the French one.