Graphic shows course for Aintree Grand National, with details of all 30 fences.

Aintree Grand National back in the running.

April 10, 2021 - After a one-year hiatus, 2021 marks the 173rd Grand National, the world’s longest, toughest and most historic steeplechase, which takes place at Aintree Racecourse, Liverpool, England. 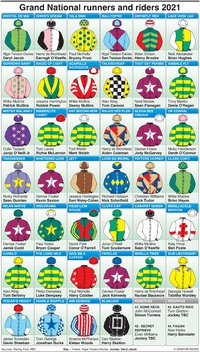 The first official Grand Liverpool Steeplechase was won in 1839 by the aptly named favourite, Lottery, while Captain Becher ensured his immortality when he parted company with his horse at the now world famous Becher’s Brook, the tricky jump that has claimed numerous victims over the years.

Aintree legend Red Rum is the most successful Grand National horse, coming home first three times, in 1973, 1974, and 1977. Red Rum was trained by another of horse racing’s great characters, the late Ginger McCain, who claimed a fourth victory in the race with Amberleigh House in 2004.

2019 winner Tiger Roll will not compete for a third successive victory to emulate Red Rum -- the Gigginstown House Stud owned horse was withdrawn in March.