March 22, 2021 - More than 2 billion people live in countries experiencing water stress while around 4 billion live in areas that suffer from severe water scarcity for at least one month per year, according to the UN. 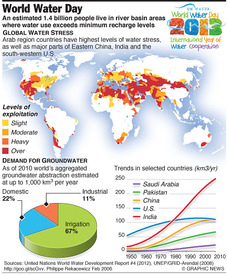 The World Water Development Report 2021 is raising awareness about the fact that many people waste or misuse water because they tend to think only of what it costs in monetary terms.

In many countries, water is treated as a low-cost resource for uses such as irrigation, but this is leading some farmers to use too much, causing scarcity for other users.

In other places, rich people receive heavily subsidised water to their homes, leading to further waste, while the poor struggle to gain access to water for essential uses.

Some of the current problems have been highlighted by the Covid-19 crisis, as 3 billion people around the world lack access to basic handwashing facilities, and a similar number are now affected by water shortages.

Agriculture accounts for nearly 70% of global water withdrawals, mainly for irrigation but also for livestock and aquaculture. The ratio can reach up to 95% in some developing countries.

Climate change is altering rainfall patterns, reducing water availability, and worsening the damage caused by floods and drought around the world.