February 6, 2021 - March 20, 2021 - The Six Nations, the northern hemisphere’s premier rugby union tournament kicks off. England, who recovered from an opening day defeat to become champions in 2020, kick off their campaign with a Calcutta Cup clash against Scotland at Twickenham, while France travel to Rome to face Italy at the Stadio Olimpico. The following day, Wales host Ireland at the Millennium Stadium.

The 2021 Championship begins amid concerns that the tournament may need to be suspended, with rising coronavirus cases in Europe and the newly-found, more transmissible variant established in the United Kingdom. France have agreed to travel to Rome for their opener against Italy, but the French government has cast doubt on away clashes with England and Ireland. With the Top14 and European competitions currently halted, whether the tournament is completed as scheduled could hinge on Covid-19 cases being brought under control in the coming weeks -- the championship is due to run until March 20. 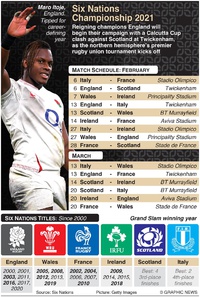