January 7, 2021 - November 21, 2021 - The new ATP Tour season continues to be affected by the coronavirus pandemic, with the first major showpiece of the year -- the Australian Open -- delayed until February. The tour is due to feature three further Grand Slams and the delayed Olympic Games in Japan, before concluding in November with the Nitto ATP Finals, hosted by Turin 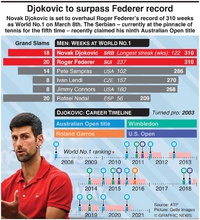 Only the top eight players who collect the most ranking points over the calendar year will compete in the season-ending Nitto ATP Finals, to be played in Italian city Turin for the first time as the tournament relocates from London.