The 2020 Stanley Cup features a shortened format due to the ongoing coronavirus pandemic. The top four teams in each conference, plus four qualifying teams, will contest a best-of-seven play-off series, the last of which is the Stanley Cup Finals, contested by the two conference champions.

The top four teams in each conference played round robin matches to decide seeding postions 1-4. The next 8 teams (5th-12th placed finishers) played a one-off match to fill the remaining four qualifying places, seeded 5-8. 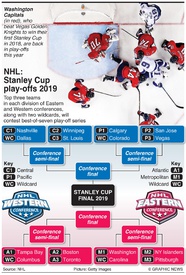