Graphic shows route to the final at London’s Wembley Stadium, with team statistics and team news.

August 1, 2020 - The final of the FA Cup, the world’s oldest Association Football competition, will be contested by London rivals Arsenal and Chelsea. The match is a repeat of the 2002 and 2017 finals, both won by Arsenal. Victory for the Gunners would secure European football next season via Europa League qualification.

Arsenal have won the FA Cup on a record 13 previous occasions, most recently with victory over the Blues in 2017, and are making their 21st appearance in the final. The Gunners, who finished a disappointing eighth in the Premier League this season, narrowly beat Leeds United in the third round and followed up with victories over Bournemouth, Portsmouth and Sheffield United. A convincing semi-final win over Manchester City sealed their Wembey berth.

Chelsea legend Frank Lampard is aiming to secure his first silverware at the helm at Stamford Bridge, and the Blues’ ninth FA Cup trophy overall. After easing through the early rounds with wins over Nottingham Forest and Hull City, Chelsea have had a tough route to the final, having to overcome tricky Premier League opposition in the form of champions Liverpool, Leicester City and Manchester United to secure their spot at Wembley.

Arsenal and Chelsea have met on 200 previous occasions, with the Gunners securing 76 wins to the Blues’ 65 victories, while 59 matches have ended in a draw. Chelsea beat Arsenal 2-1 at the Emirates Stadium in December, before the pair played out a 2-2 draw at Stamford Bridge in January. 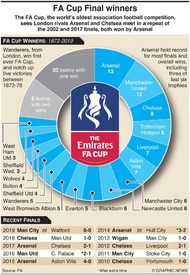