Migrants need 70 points to be eligible to work in UK

July 15, 2020 - EU and non-EU workers will be equally assessed under Britain’s post-Brexit points-based immigration system. An applicant must score at least 70 points to qualify for entry.

Home Secretary Priti Patel announced new details of the system on Monday, including a special fast-track visa for healthcare workers.

Hundreds of thousands of people who work in Britain's publicly funded National Health Service come from abroad, and many in the sector fear post-Brexit staff shortages.

The government said social care workers will not be eligible for the special healthcare visa, drawing criticism from unions.

The UK’s new immigration rules are set to come into force on January 1, 2021 – after the Brexit transition period – immediately ending freedom of movement with the European Union.

Visa applicants must have an offer of a job on a list of eligible occupations and speak English – earning them 50 points.

Additional points would be awarded for meeting criteria such as holding a PhD in a subject relevant to the job, or earning a salary of at least £25,600.

Those with job offers in “shortage occupations” such as nursing and civil engineering would also be able to earn extra points. 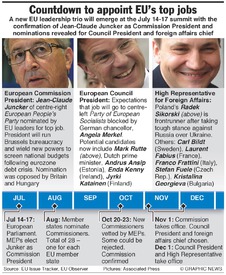