Graphic shows main points of contention between Poland and the EU over the last five years.

What is at stake in Poland’s elections?

July 12, 2020 - Poland’s presidential election, to be decided in a run-off between incumbent Andrzej Duda and liberal Warsaw mayor Rafal Trzaskowski, could prove a turning point in troubled relations with the EU. 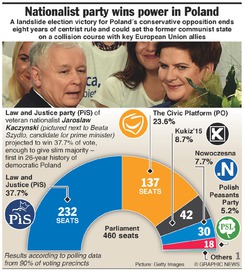