Global hunger could double due to impact of Covid-19

April 22, 2020 - The number of people facing acute food insecurity could double this year as a result of the coronavirus pandemic, according to analysis by the United Nations’ World Food Programme (WFP).

WFP Executive Director David Beasley told the UN Security Council that even before Covid-19 became an issue, he was telling world leaders that “2020 would be facing the worst humanitarian crisis since World War II.” That’s because of wars in Syria, Yemen and elsewhere, locust swarms in Africa, frequent natural disasters and economic crises including in Lebanon, Congo, Sudan and Ethiopia, he said.

Beasley said 821 million people go to bed hungry every night all over the world, a further 135 million people are facing “crisis levels of hunger or worse,” and a new WFP analysis shows that as a result of Covid-19 an additional 130 million people “could be pushed to the brink of starvation by the end of 2020.”

According to WFP, the 10 countries with the worst food crises in 2019 were Yemen, Congo, Afghanistan, Venezuela, Ethiopia, South Sudan, Syria, Sudan, Nigeria and Haiti.

Beasley said in many countries the food crisis is the result of conflict.

But he said he raised the prospect of “a hunger pandemic” because “there is also a real danger that more people could potentially die from the economic impact of COVID-19 than from the virus itself.”

The WFP chief said lockdowns and economic recession are expected to lead to major income losses for the working poor.

He pointed to a sharp drop in overseas remittances that will hurt countries such as Haiti, Nepal and Somalia; a loss of tourism revenue which, for example, will damage Ethiopia where it accounts for 47 percent of total exports; and the collapse of oil prices which will have a significant impact in lower-income countries like South Sudan where oil accounts for almost 99 percent of total exports. 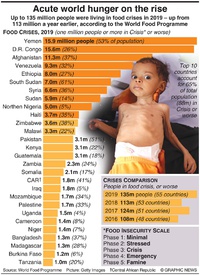