The Great Barrier Reef, the world’s largest reef system, covers over 2,300km. A World Heritage site is recognised for its “enormous scientific and intrinsic importance”.

The reef has only just begun to recover after being heavily hit by two consecutive years of coral bleaching in 2016 and 2017.

The earlier events hit two-thirds of the reef system, wiping out coral populations and destroying habitats for other sea life.

In 2019, Australia downgraded the reef’s five-year outlook from poor to very poor, due to the impact of human-induced climate change. 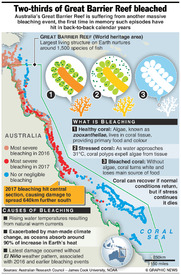