Graphic shows estimated number of delegates per candidate and states won in the Democratic presidential race as of March 18.

March 18, 2020 - Joe Biden swept the Arizona, Florida and Illinois primaries, taking a giant step toward clinching the Democratic nomination on a day overshadowed by the coronavirus pandemic.

The former vice president's third big night in as many weeks came Tuesday amid tremendous uncertainty as the Democratic contest collides with efforts to slow the spread of the virus that has shut down large swaths of American life.

Polls were shuttered in Ohio, and although balloting went ahead as scheduled in the three other states, election workers and voters reported problems.

With the exception of North Dakota and the Northern Mariana Islands, Sanders hasn't scored a victory since Super Tuesday on March 3. 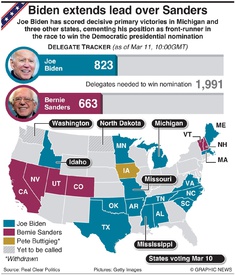