March 3, 2020 - The offensive against the Muslim Brotherhood and its allies in the UN-backed unity government in Tripoli is threatening to ignite a proxy conflict between its supporters Turkey and Qatar, and the UAE, Egypt, Saudi Arabia, Russia and France on the other side.

Rival governments in Tripoli and Tobruk have failed to stabilise war-plagued Libya since the fall of authoritarian ruler Muammar Gaddafi in 2011.

The Tobruk-based government is allied to General Khalifa Haftar -- a renegade officer from the Gaddafi era whose militia’s control most of Libya’s east and south. Haftar is supported mainly by Egypt, the United Arab Emirates and UN Security Council permanent member Russia. The Government of National Accord (GNA), led by Prime Minister Fayez al-Sarraj and backed by the UN and international community, holds a shrinking area in the west, including the capital Tripoli.

Three powerful Islamist militias allied to the Muslim Brotherhood back the GNA. These include the Misrata militias which liberated the Islamic State stronghold of Sirte in 2016.

Having been criminalised for decades by the Gaddafi regime, the Muslim Brotherhood has tried to establish itself as a legitimate political force. In 2012, the Brotherhood’s new Justice and Construction Party (JCP) stood in Libya’s first post-Gaddafi national parliamentary elections, winning 34 out of 200 seats. However, JCP support waned amid political gridlock and deteriorating security, and in the 2014 parliamentary elections, it secured only 25 seats.

Currently, JCP holds sway over the GNA government as its members and associates hold positions of power in the political, security, and economic sectors.

To Egypt, the United Arab Emirates and Saudi Arabia, the idea of the Brotherhood controlling Libya’s oil and gas wealth is anathema. These nations have turned to General Haftar to block the advance of the Muslim Brotherhood in Libya.

Turkey announced in January that it is sending troops to Libya in support of the GNA. The decision followed the deployment of hundreds of Syrian fighters to reinforce the GNA’s militias.

A succession of peace efforts over the last two months, including an unofficial ceasefire declared by Turkey and Russia, has failed to curtail the current offensive. The next meeting is scheduled for early March in Rome, though it remains uncertain which of the warring sides will attend. 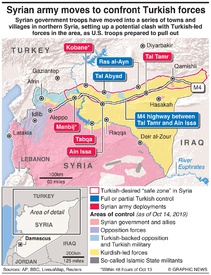