Graphic shows route of Nord Stream 2 and key dates in the project. 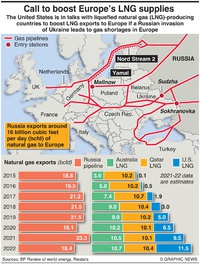 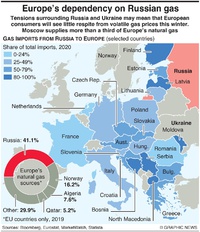 In December 2019, U.S. sanctions forced key Swiss-based contractor Allseas to withdraw its pipelaying vessels from the project – with less than seven percent of the total length of the pipeline left to lay.

The U.S. has been an outspoken critic of the pipeline, which will allow Russia to transport natural gas directly to Europe via the Baltic Sea, bypassing the traditional route through Ukraine. Along with eastern European countries that also oppose the project, the U.S. government argues that it will increase Europe’s dependence on Russia for energy.

Nord Stream 2 is owned by Russia’s Gazprom, with investment from several European companies.

In mid-January, President Putin said Russia could finish building the pipeline on its own but its completion would be delayed until the end of 2020 or early 2021. Nord Stream 2 was originally expected to come online by the end of 2019.

Russia could use an existing vessel of its own – the Akademik Cherskiy – to lay the final stretch of the pipeline, according to industry experts. The Gazprom-owned ship departed Nakhodka on Russia’s east coast on February 9, potentially on its way to Europe, Bloomberg said.