Graphic shows how the Thwaites glacier is melting.

January 29, 2020 - A massive research effort is underway to understand why the Thwaites glacier is melting so fast. If it collapses, it could trigger catastrophic sea level rise, putting coastal cities around the world at risk.

Thwaites glacier, covering 192,000 square kilometres – an area the size of Great Britain – is particularly susceptible to climate and ocean changes. Over the past 30 years, the amount of ice flowing out of the region has nearly doubled.

A collapse of the glacier would increase sea levels by around 65cm and could trigger a wider collapse of the West Antarctic Ice Sheet, raising seas by a calamitous 3.3m.

As part of a five-year, $50m international effort underway to understand why the glacier is changing so rapidly, a team of scientists have drilled through the Antarctic glacier.

The 600-metre deep borehole has allowed researchers to lower down a torpedo-shaped robotic submarine to explore the underside of the ice shelf. 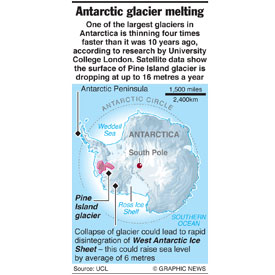