Graphic shows transit path across the sun and a visual explanation of why the transit happens.

November 11, 2019 - The innermost planet in our solar system will be visible as a tiny black dot moving across the face of the sun, a rare astronomical event that will not be seen again until 2032.

As seen from Earth, only transits of Mercury and Venus are possible, according to Space.com, because these are the only planets that lie between Earth and the Sun. Transits of Venus occur in pairs separated by about eight years, with more than a century separating each pair.

The telescope is necessary because Mercury is very small compared to the Sun – only 1/160 the diameter of the star. 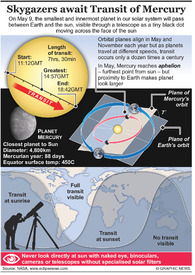