October 26, 2019 - March 22, 2020 - The FIS Alpine Ski World Cup is the premier international circuit of alpine skiing competitions, taking place at more than 30 venues in 12 countries. The season begins in Soelden, Austria, and concludes in March at the World Cup finals in Cortina d'Ampezzo, Italy.

This season will mark a charging of the guard in the men’s competition, after the retirement of eight-time overall champion Marcel Hirscher. After almost a decade of domination, the 30-year-old Austrian chose to bow out of the sport at his superlative peak, finishing in third place for overall wins (68) behind skiing legends Ingemar Stenmark (86) and Lindsey Vonn (82).

Mikaela Shiffrin of the United States will vie for her fourth straight overall title, after winning the 2018-19 title by over 800pts. 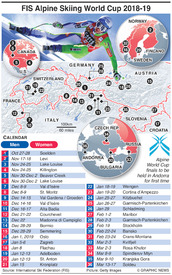