December 1, 2019 - The new European Commission takes over a month later than planned. Ursula von der Leyen’s new team was scheduled to start its work on November 1 but the transition process was delayed after the Parliament rejected three candidates from France, Romania and Hungary, whose governments then had to find replacements.

The new team of commissioners were confirmed by a vote of the European Parliament on November 27.

She has received praise for her effort to create a gender-balanced commissioner for the first time. 12 of her 27 commissioners are women.

Dutch socialist Timmermans is in charge of the European Green Deal that Von der Leyen champions.

There is no UK commissioner. Prime Minister Boris Johnson's government opted not to nominate a candidate even though the UK has not yet left the union and the EU has since launched legal action. 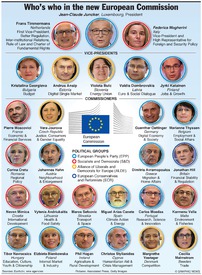