News Sport
Interactive graphic shows how the Artemis programme intends to put people on the Moon once again, this time using a lunar orbital platform called Gateway, that could ultimately see them send astronauts to Mars.

July 17, 2019 - Half a century after NASA sent men to the moon under project "Apollo," the space agency is now working to land men and women on the lunar surface as part of its ambitious "Artemis" programme.

Fashion for the final frontier 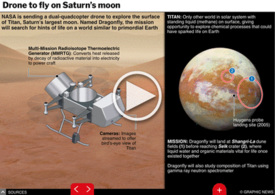