July 10, 2019 - The U.S. has urged Turkey to halt drilling operations off Cyprus after a second Turkish ship arrived to begin prospecting for natural gas and oil in disputed waters.

The Yavuz dropped anchor just northeast of the Karpasia peninsula, a jutting panhandle which is in territorial waters.

The other Turkish vessel, the Fatih, is anchored some 37 nautical miles off the western coast of the island in an area Cyprus claims is its Exclusive Economic Zone (EEZ), a maritime zone in which it has rights over its natural resources.

The region near the divided island is believed have rich natural gas deposits, triggering a race between Turkey and the internationally recognised Cyprus, which also plans to ramp up its exploratory activities in the eastern Mediterranean.

Cyprus was divided in 1974 after a Turkish invasion triggered by a brief Greek-inspired coup. Several peacemaking efforts have failed and the discovery of offshore resources has complicated the negotiations. 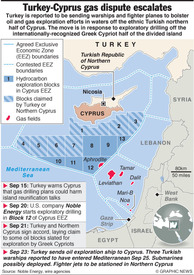