May 15, 2019 - Adverse jury verdicts have wiped more than 40% from Bayer’s market value since August 2018, with the German pharmaceutical group ordered to pay damages over its glyphosate-based weedkillers.

A jury in California on Monday awarded more than $2bn to a couple who said the weedkiller Roundup was responsible for their cancer.

It is the third time that the German pharmaceutical group Bayer has been ordered to pay damages over its glyphosate-based herbicide.

Bayer, which acquired Roundup maker Monsanto for $63 billion last year, denies the allegations, saying decades of studies and regulatory approvals have shown glyphosate and Roundup to be safe for human use.

But the company faces similar U.S. lawsuits by more than 13,400 plaintiffs and shareholders have rebuked Bayer’s top management over its handling of the Monsanto acquisition and the litigation it inherited. 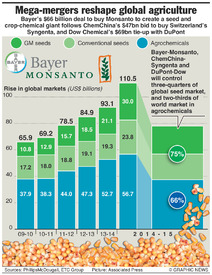