Responsive interactive graphic shows route, calendar, and details of each stage with live results of each stage, including leader’s progress, and full classification results.

May 11, 2019 - June 2, 2019 - The 2019 Giro d’Italia features three individual time trials and seven summit finishes in a balanced but testing route which ramps up into a brutal second half raced almost entirely uphill.

The 102nd edition of the event consists of 21 days of racing, covering more than 3,500km, with a time trial finish in San Marino being the only stage to leave Italy’s borders. Both the start in Bologna and finish in Verona will be individual time trials. 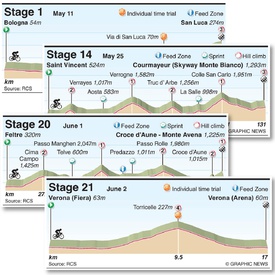