March 3, 2019 - Over 36,000 runners are expected to participate in the Tokyo Marathon. The course was revised in 2017 to move the race finish in front of the Imperial Palace, and both the men’s and women’s races produced new records that year. 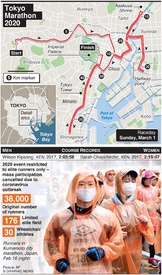 Two-time Olympic champion Kenenisa Bekele heads the men’s field in Tokyo -- his personal best of 2:03:03, the third fastest marathon in history, was recorded on the original course. The Ethiopian will face tough competition from long-term rival Dickson Chumba of Kenya, the reigning Tokyo champion.

Expectations are high for a record-breaking pace in the women’s race. Ethiopian rising star Ruti Aga, who recorded a personal best of 2:18:34 in Berlin last September, heads the field, with Kenya’s Florence Kiplagat providing fast opposition.