Graphic shows offences involving a knife or sharp instrument in England and Wales in 2017 and 2018.

February 18, 2019 - Knife crime offenders in London will have to wear GPS trackers upon release from prison in a bid to tackle violence in Britain’s capital. 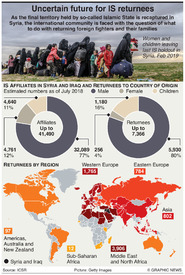 However, homicide rates in the two cities, which have similar population sizes, ended the year with the NYPD reporting 289 murders and the Met investigating 132 homicides.