Graphic shows destruction in and around Palu city.

October 3, 2018 - A picture of large scale destruction has emerged in Palu city following the earthquake and tsunami that struck the Indonesian island of Sulawesi on Friday. 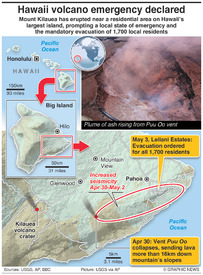 The death toll has passed 1,400 but officials warn that the number of casualties could rise into the thousands. Palu was one of the worst-affected areas, with several neighbourhoods almost completely wiped out.

While coastal areas took heavy damage because of the tsunami, satellite images reveal large inland flows of mud that caused severe damage in densely populated areas. Intense shaking from the earthquake may have triggered liquefaction and lateral spreading, processes in which wet sand and silt takes on the characteristics of a liquid.