August 9, 2018 - August 12, 2018 - The PGA Championship celebrates its 100th anniversary at Bellerive Country Club in St. Louis, Missouri. It will be the second PGA Championship to be played at the venue, and will also be the last held in the month of August as the tournament moves to May starting in 2019.

Bellerive is a long course, stretching more than 7,300 yards, and has five par 4s that measure over 450 yards from the championship tees, with the longest of those being the 508-yard 10th hole.

It was also built around a large creek that comes into play on nine of the holes, with water hazards in play on 11 holes. 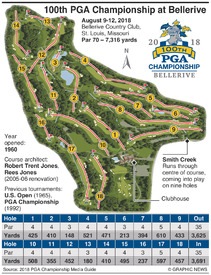