June 27, 2018 - The “Hayabusa2” asteroid exploration mission, by the Japan Aerospace Exploration Agency (JAXA), is set to arrive at asteroid Ryugu on June 27, after a five-year flight. It will release a series of lander/rovers and an explosive penetrator to be used to acquire sample materials for return to Earth.

Hayabusa2 is a Japanese space exploration mission setting out to study the Ryugu asteroid (formerly known as 1999 JU3). Its primary goal is to touch down on the surface and extract mineral samples from the exterior and interior of the 880m-wide rock – the interior study involving the firing of an impactor which will explode on the surface allowing Hayabusa’s Sampler Horn to delve into the subsurface.

But the space probe is packing a lot more than that, in the form of four lander/rovers known as MINERVA-II-1A, MINERVA-II-1B, MINERVA-II-2 (developed at Japanese Universities and JAXA) and MASCOT (built by the German and French space agencies). The latter is the most advanced of the four, carrying a plethora of instruments to study the asteroid at a microscopic level and deliver a unique set of data. Each of the lander/rovers can move about the asteroid’s low gravity by shifting weights inside themselves, allowing inertia to flip them over and thus hop about the surface, albeit in a somewhat haphazard manner.

Following the completion of the asteroid landings and collection of three samples, Hayabusa2 will take a year to journey back to Earth whereupon it will send a re-entry capsule, loaded with minerals, to the Woomera Test Range, 400km north of Adelaide in Australia. 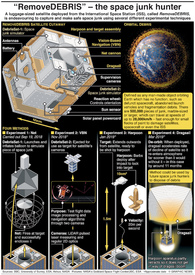 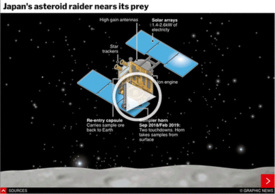 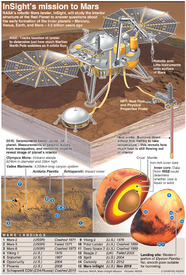