Graphic shows Grenfell Tower and cut away of the aluminium cladding believed to have spread the fire.

June 15, 2017 - With 17 confirmed dead but dozens of people still missing, fire chiefs say no more survivors are expected to be found in London’s 120-apartment Grenfell Tower. 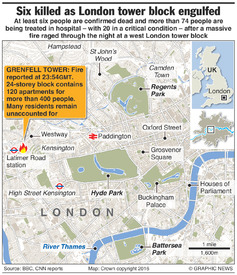 Eyewitnesses who escaped from the block said they had not heard any fire alarms within the apartments and that those in the corridors were barely audible. Around 500 people were in the building when the blazes started on the fourth floor – as many as 200 people are missing.

Design specifications seen by the Press Association suggest the renovation work carried out at Grenfell Tower included plans for aluminium cladding with a 50mm “ventilated cavity” to vent moisture next to 150mm of Celotex FR5000 insulation, which has a Class 0 rating — the highest rating for preventing the spread of flames.

Fire investigators are focusing on the cladding. Experts believe this may have failed with the void between the aluminium panels and building fabric acting as a chimney to spread the fire.