April 12, 2011 - Fifty years ago, Soviet cosmonaut Yuri Gagarin became the first man in space, completing a single orbit of Earth in 108 minutes. The feat – which made Gagarin a national hero – was used by the Soviet Union as a major Cold War propaganda coup. 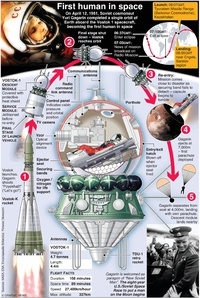 On the morning of April 12, 1961, a cocky 27-year-old carpenter’s son -- and lieutenant in the Soviet Air Force -- Yuri Alekseyevich Gagarin was helped into an orange space suit. Accompanied by backup cosmonaut Gherman Titov, he was driven by bus to Site No. 1 at the Tyuratam Missile Test Range, now Baikonur Cosmodrome, on the desolate steppes of Kazakhstan.

There was no speech. He simply said goodbye and was strapped into the small round Vostok capsule at the top of a 280-tonne modified R-7 ICBM (intercontinental ballistic missile) that had been designed to deliver a nuclear bomb.

There was no dramatic countdown. At 9.06.59am the Soviet Union’s rocket genius Sergei Korolev pressed an ignition key and the R-7 rose majestically from the launch pad. Gagarin shouted: “Poyekhali!” (“Let’s go!”)

As the core stage, with its four conical strap-on boosters, thundered upwards at 500 metres per second, Gagarin made the first space-bound joke. “T plus 100. How do you feel?” asked Korolev, who was controlling every manoeuvre from the ground. “I feel fine,” replied Gagarin. “How about you?”

Just over three minutes later the core booster separated and the final stage ignited, pushing Gagarin’s Vostok capsule to a gravity-defying 6,000 metres per second. There was complete silence in mission control, apart from an operator repeating, every 30 seconds: “the flight is normal”. That changed when, nine minutes into flight, the craft reached orbit -- the operator was drowned out with shouts from the ground crew, recalled Mikhail Marov, one of Korolev’s research engineers.

Marov remembers Gagarin talking quietly and calmly. “I can see clouds. I can see everything. It’s beautiful,” he told mission control. Around 40 minutes later Vostok swept over the United States. Half an hour later Korolev fired Vostok’s retro rocket and the capsule began its descent.

Reentry, however, came close to disaster. A securing band connecting Gagarin’s capsule to its service module failed to detach. The capsule began to spin and tumble, exposing unprotected areas to the searing heat of reentry. “All goes well,” Gagarin calmly radioed back to Korolev.

Gagarin recalled that he nearly lost consciousness as the temperature inside rose dangerously: “I was in a cloud of fire rushing toward Earth.” Ten minutes later the securing band burned through and the two modules separated.

Gagarin blew open the hatch and was ejected, as planned, to make a parachute descent from 7,000 metres. Initially the Soviets hinted that Gagarin had made the landing inside the Vostok capsule, fearing that people would assume a problem had occurred. However, the ejector seat was used for all six Vostok missions.

Gagarin landed close to the community of Smelovka, near Saratov in southern Russia. Two villagers witnessed the moment, but he reassured them: “Don’t be afraid, I am a Soviet like you who has descended from space and I must find a telephone to call Moscow!”

News of Gagarin’s flight swept around the globe and two days later he was the focus of a vast military parade in Moscow – a major Cold War propaganda coup for the Soviet Union.

A few weeks after Gagarin’s flight – on May 25, 1961 – U.S. President John F. Kennedy made his keynote speech committing America to sending a man to the moon and returning him safely before the end of the decade. The Space Race was on.

If Gagarin were alive today he would be surprised that Korolev’s Soviet-era ICBM, now redeveloped as the Soyuz rocket launcher, lifts Russians, Americans and astronauts from five other space agencies to the International Space Station. In the five decades since the first spaceman’s 108-minute journey, 520 men and women from 38 countries have travelled into space