It has been both the blessing and the curse of Kirk Douglas’s career that he has the rugged looks of a screen idol, the intelligence of a university professor and the social conscience of a parish priest.

It has meant that while his many fans have usually been happy to see him in uncomplicated, all-action movies, Douglas himself has sought out an extra dimension wherever possible. As a result, there is a depth to some of his leading roles that would not have been immediately apparent had they been played by some of his contemporaries.

For example, under his guidance Spartacus became far more than just another of the sword-and-sandals epics that were rolling off the production line in the sixties. It became the chronicle of a simple man’s attempt to beat a system that was essentially unfair and oppressive, and in the 40 years since it was made people have continued to discover its hidden layers.

As he approaches his 85th birthday, Douglas may well look back and consider that Spartacus, which he also produced, bore more than a passing resemblance to his own remarkable life story.

Born in New York, the son of illiterate Jewish-Russian immigrants, Douglas was consumed with a determination to improve his lot in life, even working as a janitor to help the fund the wrestling scholarship he had been awarded at university.

He eventually made his way into acting and first came to prominence in “Champion” (1949), where his role as the boxer who has to contend with the seamier side of the sport earned him the first of three Oscar nominations. He then showed his business acumen by forming one of Hollywood’s first independent film companies, which he named Byrna in memory of his mother.

Many consider this the most productive phase of his career, with “Paths of Glory” and “Lonely are The Brave” joining “Spartacus” in the Byrna stable. It was also a time when Douglas decided to make a principled stand against the notorious writers’ blacklist established in the McCarthy era by giving the previously proscribed Dalton Trumbo a writing credit for Spartacus.

With his career established, Douglas, who by now had four sons and a stable second marriage, began to respond to the demands of his social conscience. He formed the Douglas Foundation which for the past 46 years has helped many charities from the handicapped to the homeless.

He also began to tour the world lecturing on the value of freedom and democracy and in 1981 was awarded America’s highest civilian honour, the Medal of Freedom, in recognition of his outstanding work. Fellow artists showed their appreciation of his outstanding career by awarding him a special lifetime achievement Oscar in 1996.

With his mobility somewhat curtailed by the after-effects of a stroke, Douglas now spends much of his time writing. His autobiography “The Ragman’s Son” received great critical acclaim when it was published in 1988, and he has since gone on to write several novels.

He has continued to take great interest in his sons’ careers in the entertainment industry and has worked with all of them on different projects. No doubt they and their families will all be gathered at the Douglas home on December 9 to toast the 85th birthday of the grand old man of Hollywood. 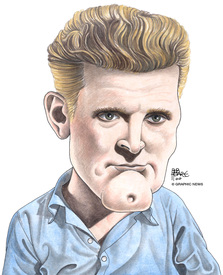