Graphic shows timeline and route of B-29 bomber, Enola Gay, which dropped the atom bomb on Hiroshima.
GN01681
EN

August 5, 1993 - On August 6 some 50,000 people will congregate, as they do every year, around the Atom Dome in the Peace Park in Hiroshima to commemorate the many thousands killed in the atomic bombings of Hiroshima and Nagasaki 48 years ago this week. At 8:15am – the time at which a blinding flash destroyed Hiroshima and most of its population – a peal of bells will signal to the crowd, including survivors of the bombing, to bow their heads in silent prayer.

The Peace Park was built on the site of a bridge in the centre of the city that took the full force of the explosion on August 6, 1945. The Atom Dome, the only building left standing amid the destruction, has remained untouched in memory of 140,000 people who died and a further 70,000 who lost their lives when Nagasaki was bombed three days later.

An additional monument will be unveiled this year. Wall remains from one corner of Hiroshima’s Red Cross Hospital were kept in place when a new hospital was built on the same site after the war but this has now become dilapidated and is being demolished. The walls, each about 16 feet (5 metres) wide, have been mounted on a stone base and will be preserved in memory of the victims.

At an anti-nuclear conference taking place in Hiroshima to coincide with the anniversary, Joseph Rotblat, a British physicist who worked on the Manhattan Project to develop the atomic bomb, said that while world powers cling to nuclear weapons they cannot deny their acquisition by other nations, which will ultimately render the Nuclear Non-Proliferation Treaty unsuccessful. Rotblat left the Manhattan Project in late 1944 when it became clear that Germany was close to defeat – but the programme continued and the bombs built to deter Germany were used ‘as soon as they were made’ on Japan.

The bombing of Nagasaki was described by Britain’s official observer, Group Captain Leonard Cheshire, on whom it left a profound effect. He described feelings of strong moral revulsion as the B-29 aircraft flew towards Japan in the early hours of that August morning – his first sight of the coastline reminding him of Cornwall and memories of his childhood. As the bomb was released over the target, he waited intently for the explosion six miles below. A gigantic plume of white smoke was followed by a flash of light which became a huge fireball, half a mile (0.8km) in diameter, gradually turning to dense smoke above the ground and rising at a speed of 20,000 feet (6,000 metres) per minute. Cheshire was overwhelmed by the power of the huge, terrifying shape and feelings that swung between relief, hope and deep revulsion. During the return flight to the island of Tinian, no-one spoke. Later that day they heard news of the Japanese surrender, bringing an end to the second World War. 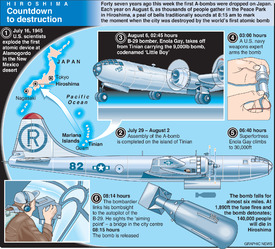