Graphic shows timeline and route of B-29 bomber, Enola Gay, which dropped the atom bomb on Hiroshima.
GN00972
EN

August 5, 1992 - Forty seven years ago this week the first A-bombs were dropped on Japan. Each year on August 6, as thousands of people gather in the Peace Park in Hiroshima, a peal of bells traditionally sounds at 8:15 am to mark the moment when the city was destroyed by the world’s first atomic bomb 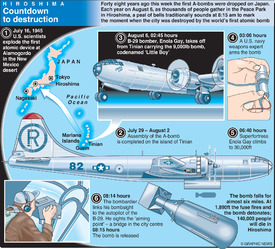