Germany will spend what it takes to tackle the coronavirus which is likely to infect up to 70% of the population in Europe’s largest economy, Chancellor Angela Merkel said.

Italian Prime Minister Giuseppe Conte announced the closure of schools, gyms, museums, nightclubs and other venues across the country, which on Wednesday passed 10,000 confirmed infections.

As fears across Europe grow about the potential financial fallout from the outbreak, Britain unveiled a £30bn ($39 billion) economic stimulus plan on Wednesday to tackle the risk of a coronavirus recession, just hours after the Bank of England slashed interest rates in a double-barrelled response to the crisis.

Meanwhile, Spain's coronavirus cases have surpassed 2,000, with roughly half of them in the Madrid region, where two-thirds of the country’s virus deaths have occurred. 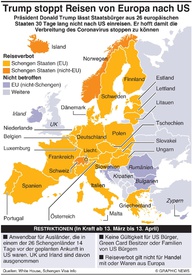