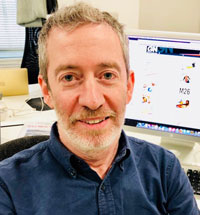 Director overseeing the production side of the business, the development of the website and general IT support for all the company infrastructure.Phil was recruited as a young graduate because of the beautiful and informative illustrations for his product design work, but later demonstrated a remarkably wide range of abilities. After initially working in Adobe Illustrator and Photoshop to produce beautiful and interesting graphics on a wide range of subjects, his enthusiasm for taking on new challenges led him to oversee the transition of the Graphic News website from a FirstClass client-software bulletin board system of the 1990s to the modern delivery platform it is today, meeting the challenges of displaying both our static and interactive graphics from desktop to mobile.

Becoming equally at home with HTML5, CSS, XML, JSON, Javascript, PHP and other server-side languages while developing the website, Phil has spearheaded our interactive and digital products and, spurred by a keen interest in sport, developed techniques for dynamically including live data in both “static” flat graphics produced in Adobe Illustrator and then in interactive graphics produced in Adobe Flash, Adobe Edge Animate and Tumult Hype. These have since been applied to major packages including the Olympics, World Cups and U.S. elections, reaching millions of readers around the globe.

The development of a new website in collaboration with Fiona Roberts and Affinity Agency has taken up most of Phil’s time recently. Combining the facilities expected of a modern website with those needed by traditional media publishers has been a considerable challenge; allowing single users as well as groups; allowing pay-on-invoice as well as pay-online; expanding the use of the website as an information source; making the infographics available for educational use and by companies as well as media publishers; and including "hooks" to enable the website to be cloned or hybridised in the future.

With the launch of the new website, he is setting his sights on developing some new and exciting web products, so watch this space…!
INDEX
COMPANY
THE TEAM