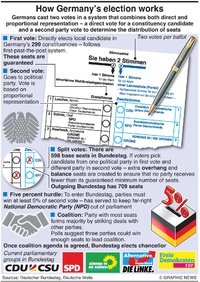 END OF THE MERKEL ERA...
On September 26, Germany will not only elect a new Bundestag but also a new chancellor, marking the end of Angela Merkel’s 16 years in office. More than 60 million people will each cast two votes in a system that combines both direct and proportional representation -- a direct vote for a constituency candidate and a second party vote to determine the distribution of seats.

Get ahead with Graphic News for both your pre-and post-election coverage...

Germany’s election process is so complex that even some Germans don’t fully understand it! Check out our ELECTION EXPLAINER

At the time of writing, polls suggest five parties stand a chance of playing a role in government after the election, with only the far-right Alternative for Germany shut out. To follow developments with unique visual storytelling from Graphic News, please CONTACT US

FOR PUBLISHERS Infographics can be published as received, or modified and translated, subject to our Terms of Use. Available in formats for print, digital and social media, in English, German, Arabic, Dutch, Portuguese and Spanish.