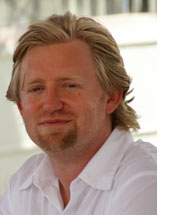 Interactive designer and developer Ben is based in Australia and combines his graphic design and web development skills to build the Graphic News' interactive graphics while London sleeps. With an initial degree in Graphic Design from the University of Northampton, and subsequent experience working as a a graphic artist and webdeveloper, Ben was recruited in 2008 whilst working in the UK to combine these talents to convert the beautiful print graphics produced by Graphic News into interactives.

The remit given was to maintain the design quality but make interactives that were modifiable, translatable and easy to use – in time to meet news deadlines. The trial began shortly before the Beijing Olympic Games and having survived that not insignificant event, interactive graphics have became part of Graphic News’ repertoire.

The rapid changes in technology over the years have given never ending hurdles – whether coping with scripting upgrades for Flash, the move from swf to html, the need for responsivity, or the move to Tumult Hype following the withdrawal of Adobe Edge.

He runs his own company now using his skills as graphic artist, 3D illustrator, designer, photographer and web developer, building websites and producing interactive graphics from his studio on his farm, high on a hill in rural New South Wales, Australia.