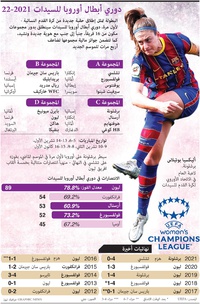 Spanish team Barcelona conquered Europe for the first time last season, defeating English Women’s Super League champions, Chelsea, in the final. The victory ended a streak of five successive titles for their 2022 final opponents Olympique Lyon, the most successful club in European football, who have won a record 96 matches in the competition.

The pair have met on three previous occasions, with Lyon winning each time, including in the 2019 final.